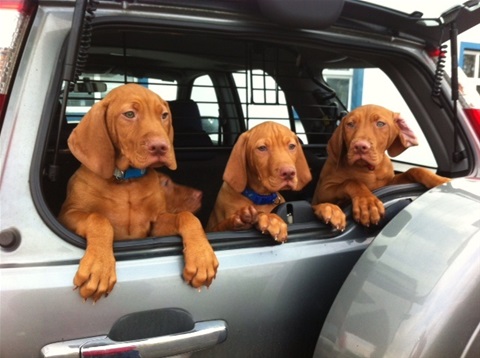 Risley Poetry in Motion has been shown since he was 4 months of age. He is a lovely puppy very sweet and loves people. He is I am told very like his father Cody as a puppy.

Nadal  as yet hasnt had many show photos taken but we hope to take some at the next few shows.

He and his sister Marnie are double trouble with Dexter his brother who will eventually find a forever home now the decision has been taken which puppy to let go, it has been a very hard decision to come too.

He is a definate velcro vizsla, love him to bits. The litter was fantastic and I am delighted that Betty allowed us to use her special boy Cody. 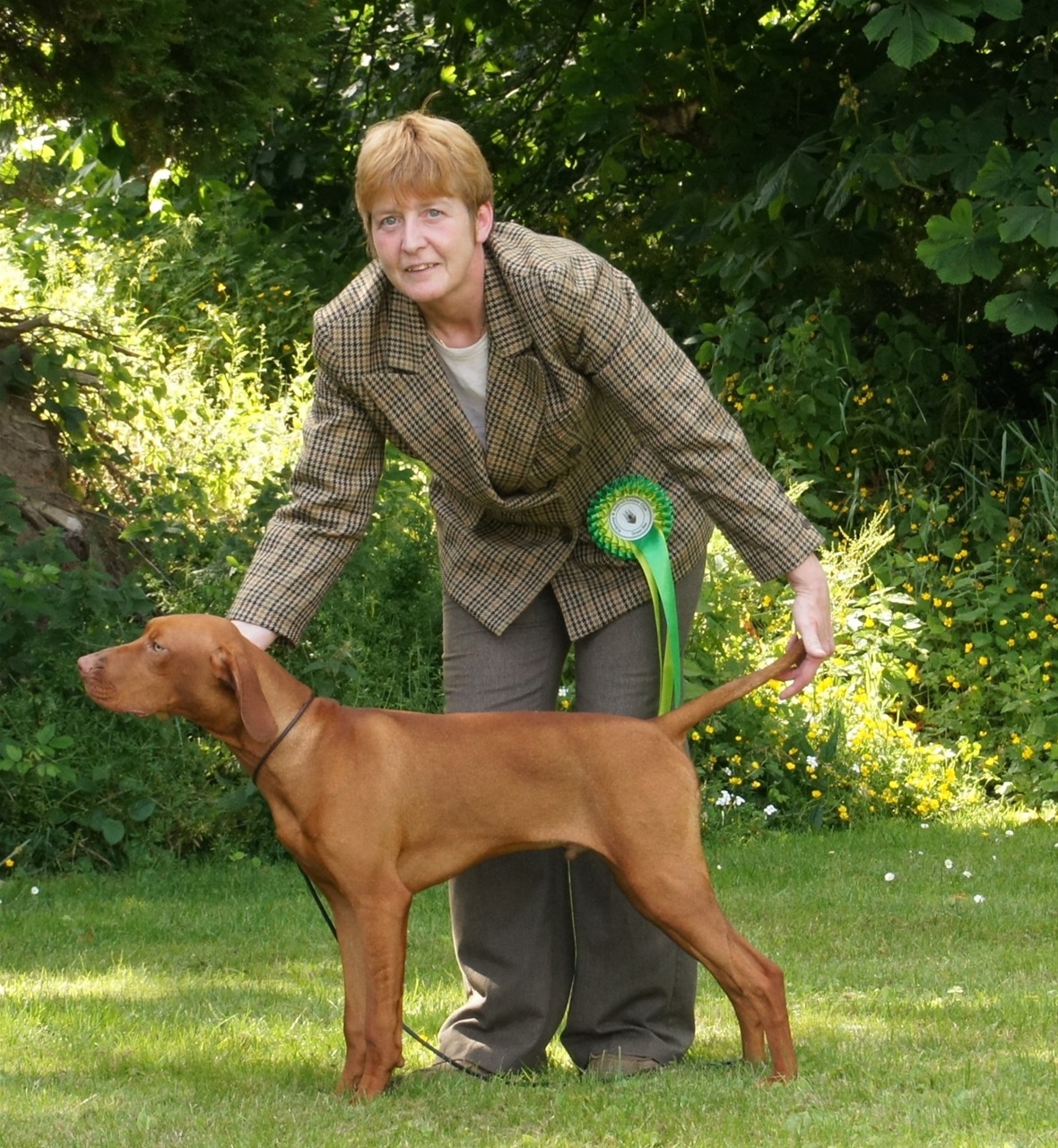 Risley Poetry in Motion, Nadal at 6 months of age. He is a real sweetheart, he isn't as outgoing as his sister but he will catch up.
Learning to stack at 7 months old.
One to watch for the future I hope. 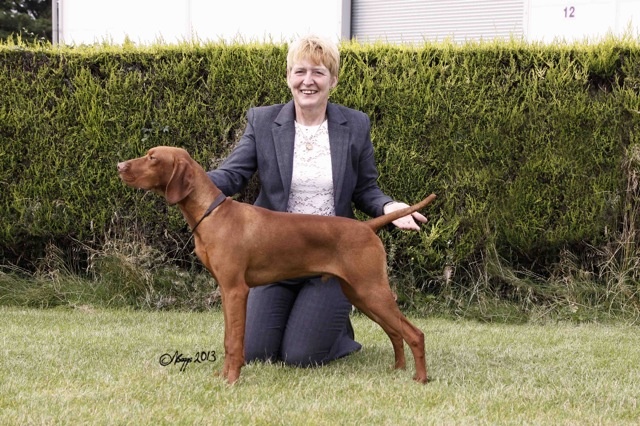 Nadal at 8 months of age, captured by Noel Beggs ... 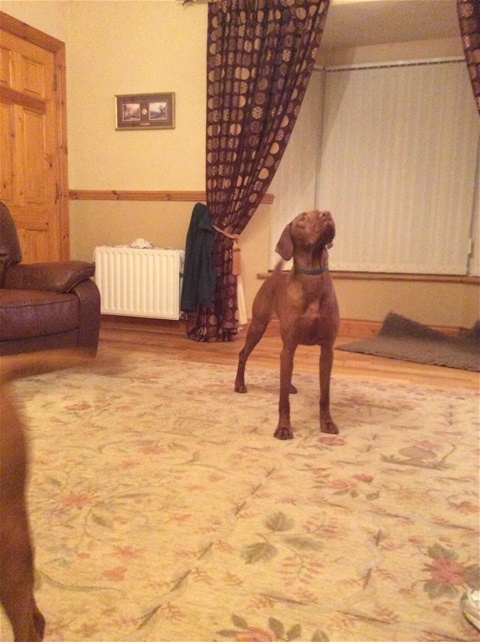 Nadal has been much slower to mature than his sister Marnie, however I have seen a dramatic improvement in him over the past few months. We have a few more shows before the end of the year, then Nadal will enjoy a few months away from the ring, allowing him to mature on before returning to the ring in 2014.

I am delighted with him and I am sure he will be much more relaxed in 2014 when he returns to the show ring. First and foremost our dogs are pets first and then show dogs. We have been in Vizsla since 1992 and without doubt will continue to own and love this beautiful breed.

in the picture opposite Nadal could smell the dog treats on the mantelpiece and was wondering how he could get to them !!!!

His sister had just gained her sh ch title so he needs to catch up fast.. 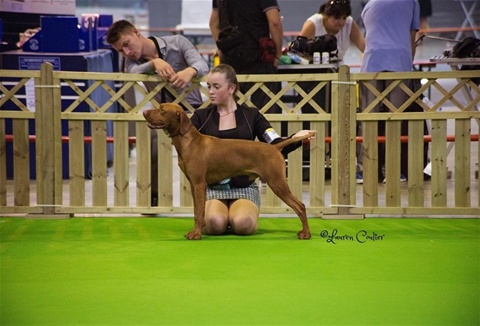 Nadal wll be two on 26th December, 2014. He has turned into a very handsome boy with an excellent temperment. He loves to be loved. A true velcro vizsla boy.

Nadal has been hip scored , eye tested and cerebral ataxia clear., and will be open at stud to very select bitches. It is coming to the end of the show year with two more shows left in Ireland and a further one in the UK, then we can relax till March 2016 before the show cycle starts again. Couldnt happen at a better time as it gives the dogs some time off and with an impending move there will be plenty to do..

Nadal having won group at Luxembourg 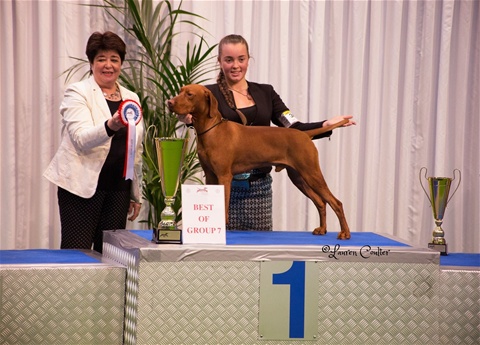 Nadal has turned into a great show dog, full of confidence . He has a great report with his handler Scarlett Burnside. His recent trip to Luxembourg saw him coming back with his Ch title having won CAC, CACIB , BOB . He then went onto win the group to say we were delighted is an understatement. He then paid a visit to Serbia again wining CAC,CACIB and took 2 nd slot in group. We are awaiting confirmation of his International title. Today we had his Sh Ch title in Ireland confirmed, and we await confirmation of his Internationnal title.

Nadal can now be known as Sh Ch, LuX 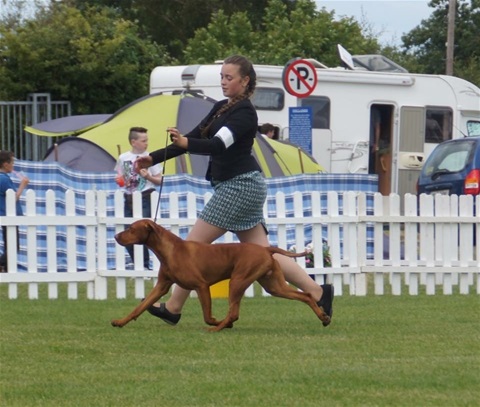 Nadal may venture out to the rings for a few shows this year. Still full of himself and no sign of him slowing down. From a young pup who didn’t excel in the ring as much as his sister Marnie he has caught up finishing a multi titled show career across Europe.